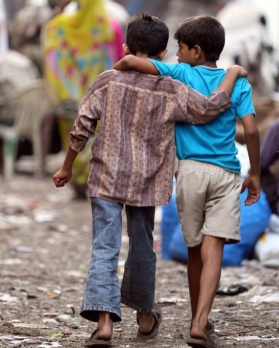 Hello. My name is Kishan. I live in Rajendra Prasad Chawl, Dharavi. If you need to reach me, just ask where Kishan lives. You don’t need a house number. Everyone knows me.

I work as a watchman at Ashish sir’s house. “Just call me Ashish” he says. But I call him Sir anyway. Apparently he’s a big photographer. Strange how you can get rich doing anything these days. He just walks around all day clicking a button, and he sleeps in a bed the size of my house. But Im not complaining. I get paid to sit in the shade with a newspaper.
A few weeks back, Ashish Sir asked me if I could take him around Dharavi to take photographs. I was confused. I thought these big photographers only took pictures of film stars, sunsets and mountains. “You wont find anything there, Sir”, I said. But he insisted.

He was already waiting for me when I met him the next morning. He even made the effort to dress in his plainest clothes. As if, with his fancy camera, cologne and gelled hair, he would ever blend in here. But I didn’t want to tell him that.
It was just like any other day in Dharavi. The chai stalls were crowded, the streets were bustling with activity, and the occasional stray napped in the shade oblivious to it all. The smell of hot coffee, pakodas and vada pav filled the air as we walked. “Wow, that smells amazing!” Sir said. I asked him if he wanted to try. But he said he wasn’t hungry.

Sir would take pictures of the funniest things. A woman carrying a bucket of water back to her chawl, the public toilets, and even piles of rubbish on the street with great enthusiasm. I have to admit it got a little embarrassing. But I didn’t mind too much. I liked being seen with Sir. In fact, when I ran into my friend that morning, I simply said “Rajat, meet Ashish”. Rajat was impressed.

“Kishan, I’m showing the Dharavi pictures to my friends this evening. You should join us” Sir said to me a few days later. I was a little uncomfortable with the idea of sitting in a room with Sir’s friends, but my curiosity got the better of me. That evening I awkwardly sat in the corner of the room as Sir’s friends seated themselves around the tv and sipped wine.
I was fascinated by what I saw. I realized I was looking at Dharavi through their eyes. I noticed their reactions. They shook their heads, clicked their tongues and sighed as the each picture flashed onto the screen.

“They live in such hardship!” said someone about the picture of a lady carrying a bucket of water. I laughed to myself. Anyone who knows Minti would have done the same. That girl hasn’t seen a day of hardship in her life. There isn’t a man in Rajendra Prasad Chawl who wouldn’t kill for a glance from her. I will agree the picture is special. But only because it captured the only time Minti did something on her own since puberty.

“Wow, so powerful!” remarked someone else about a picture of a boy standing on a pile of trash. I squinted my eyes. It was Chintu. He’s a funny little fellow, he loves painting and hates math. He keeps hiding in the trash because it is one place his mother would never find him. There was nothing powerful about it. I marveled at how these pictures made them feel so much. Maybe if I was one of them, I too would believe that this boy didn’t have a life beyond the mountain of trash he stood on.

I realize that for most of you, Dharavi seems like a dirty, crowded place of endless misery. One that makes you wonder what really goes on within the mountains of trash that fortify our homes. But to me, it is home to a million people. Holding the weight of a million aspirations, secrets and stories within its fragile walls. Can you just imagine, how many children at this very moment, are memorizing multiplication tables, how many teenagers are exchanging cautious kisses in dark corners, how many women are complaining about their daughters-in-law, and how many men are enjoying a beedi by the chai stall and discussing politics.
But all you see is head shaking-tongue clicking-sigh inducing poverty.

Tell me, can you confidently say the taste of your mothers cooking is really better than mine? Do you enjoy your Marlboro Milds more than I enjoy my beedi on monsoon evenings? Is watching the Indo-Pak match on a flatscreen tv really more exciting than huddling together in the tv room?
Look, I don’t blame you for thinking that you and I are not the same. But we have both played hide and seek as children. And maybe I hid behind mountains of trash, and you behind concrete walls. But are our lives really all that different?

You know, my mother makes the best parathas, I discuss politics with my friends over hot chai and have watched every Shah Rukh movie so far. I try my luck with Minti every once in a while. I cant say I have too many complaints. I get paid to sit around and read a newspaper in the shade. I take back pakodas for Ma every now and then. She says I am the pride of the family.

You are welcome to visit me anytime. My name is Kishan. I live in Rajendra Prasad Chawl, Dharavi. You don’t need the house number. Just ask where Kishan lives. Everyone knows me.

20 thoughts on “Postcards from Poverty”