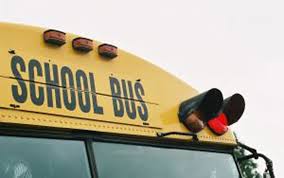 It would arrive at 7:45am sharp. The burst of lemon yellow shining bright against the dull grey Monday morning. He would honk thrice to announce his arrival, sparking a wave of panic in every household in Sunshine Apartments. Books would hurriedly be thrown in bags, milk would be gulped down at the speed of light and shoes would be left untied as they raced to the front gate. Mothers would run after them holding boxes of sandwiches, cut apples and other remnants of their half eaten breakfast. The bus would get crowded in minutes, as each fought for the last row, the window seat, the one closest to the door. The ones who arrived early would spread their school bags across the seats, saving places beside them for their friends. “Uncle, he’s reserving seats”, someone would complain as both of them tugged at the school bag. “No reserving” the driver would say to him firmly. He would sulkily pick up his bag and put it on his lap, while the other sat beside him, dramatically sinking into the seat with a triumphant smile.

In 5 minutes, he would honk again. “Uncle wait! My brother is coming” someone would say softly, peering out of the window anxiously as the seconds ticked away. The driver would look over his shoulder for a headcount before starting the engine. That’s when things got real. “Wait! My brother!” a little girl would say, her eyes welling up. “Shit, think I forgot my Science Textbook”, someone else would declare, rummaging through his bag violently before running out of the bus. “Uncle, just 1 minute” he’d say before disappearing into the corridor, letting the little girl breathe easier for a while. Everyone else would break into protests, screaming their respective agendas at the top of their voice until he returned.

At 8am, the bus would leave for school. We would stick our hands out of the window, waving to our mothers as the bus sped down the street. It would be bustling with activity. Math homework was hurriedly copied, socks were folded down and skirts were adjusted a few inches higher. We waved to strangers from the window, discussed our teachers and exchanged lunches.

The bus was everything the classroom was not. We could sleep, curse, yell, sit next to boys and shamelessly flirt with them without our friends knowing a thing. Birthdays were celebrated with great enthusiasm. Chocolates were distributed in exchange for a loud, uncoordinated rendition of the birthday song. We would sheepishly ask for more, palms outstretched, defending our requests by reminding them of all the times you were a true friend. That you would return the favour on your birthday. That the others would never do the same for him.
Bus rides were a parallel universe where the 8th graders could have conversations with the 11th graders, throw punches over the window seat and sing the ‘many boyfriends to you’ version of the birthday song, unafraid. The aftermath of a birthday was significant, the toffee wrappers spread across the floor like a battlefield as we licked our sticky fingers clean.

As soon as school was in sight, the bus would get quieter. Novels were returned to their bags, lunchboxes were closed and those copying homework would finally give up. We would get off the bus quietly and head to our respective classrooms. In school, none of us would talk. We would slip into our roles as seniors, juniors, loners and leaders seamlessly. We would simply acknowledge each other with a curt smile when we walked past each other on the field. But we’d always claim to know them. “He’s in my bus”, we’d say confidently. Not once realizing that we don’t know which grade he belongs to, what his father did, maybe even his last name. Just the strange sense of familiarity that comes with travelling to school together. A guy who’s lunch you’ve eaten, who’s place you’d reserved, who’s foot you stepped on while trying to find a seat.

The last bell would bring unadulterated chaos across the school field, as people ran to get to their respective busses. These buses competed fiercely. Different hues of yellow buses marking where our loyalties lay. We would race to get into the bus the fastest, reminding everyone to leave their classrooms as early as possible so we could leave the earliest. Our bus had the strongest team, leaving first on more occasions than not. We would bask in its glory, each of us reeling in the joys of jeering at the stationary buses through our windows as we drove past them.

Every year, students graduated, making way for the next set of older children to claim their right to the thrones in the last row. We hardly ever missed the ones who left, simply forgetting them the way the two months summer vacation faded our memories of school.The bus was always full. The ones who graduated, quick to be replaced by nervous, timid little faces. The cycle would continue for years.

Every now and then, we see a yellow school bus. Packed with little children peering out of the window on their way to school. And you can’t help but reminisce. The honking, the unfinished breakfast, the window seat, the birthdays, the inter-bus competitions, that senior boy you sat next to in the evenings. That some of the most precious memories were born, built and broken in the privacy of the rickety lemon yellow bus, as it jerkily travelled down the road. Day after day, year after year.

14 thoughts on “Wheels on the Bus go Round & Round”

Leave a Reply to Poojitha x