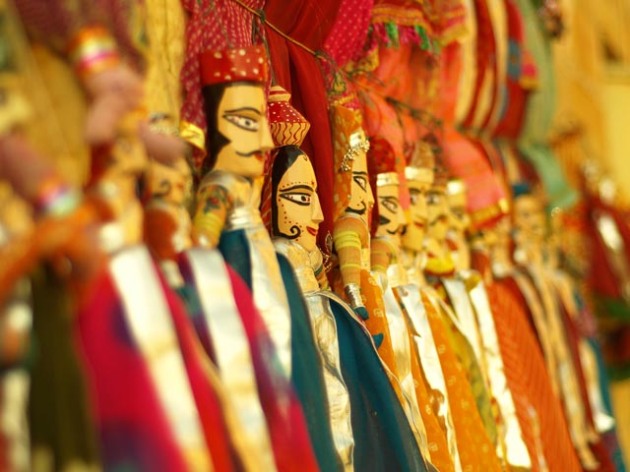 I remember the village like it was yesterday. There are few things more beautiful than the chatter of happy children, the smell of roasted peanuts, and a clear, starlit sky.

The maidan was bustling with activity as the crowd poured in. They spread coir mats, ate noisily and fought to sit in the first row. Masterji took his place behind a big black screen and pulled us out of the dark box. Dramatically, one by one. In minutes, the loud bustle was reduced to pindrop silence.

We took our places in front of the screen and patiently wait for the strings around our limbs to tighten. He cleared his throat loudly and began, bringing his audience to a trance. They leaned forward, watching with widened eyes, as he effortlessly spun story after story with the slightest tug of a string. That evening, even the crickets seemed to respect the silence. The quiet interrupted only by the sound of gasps, sighs, laughter and finally, a loud, roaring applause.
And we performed, surrendering control of every limb in our body to him. We spoke, cried, laughed and danced when we were told to. For two long hours, their eyes would follow our every move. We’d stay quiet, smiling that ridiculous smile that was plastered on us, until we were returned to the box again. Usual routine. We’d travel from village to village to perform. For as long as I can remember, our evenings began with that familiar, eager silence and ended in a loud, roaring applause.

Uncle can you teach me? A little girl quipped after the performance while Masterji packed his stuff. Masterji was amused. He took a liking to the girl instantly. They sat on the field that evening as the crowd shrunk into the night. He lit a lamp, pulled us out of our box and held us between his fingers. Just some paint, wood and sequins held together with old cloth, he said with pride. Her eyes widened. She reached for me and held my strings gently between her fingers. My arms moved. She looked at him in amazement. He laughed. Tell me a story, he humoured her. Rani thought for a moment, and began her story. Masterji picked us up and brought it to life as she spoke, mirroring her thoughts with skilful precision.
Time flew that evening. When her mother stormed onto the field to drag a teary Rani home for dinner, Masterji picked me up and handed me to her. For you, he said, without thinking twice. I looked at Masterji in disbelief. I felt betrayed. Her eyes lit up as she reached for me, holding me tight between her palms as she walked home. I strained to look back at Masterji, watching, as the only life I knew was being packed into a small box, and disappearing into the horizon.

That month, Rani was the envy of every child in the village. She would beam with pride when the children came home to see me, as each remarked on how lucky she was. They would follow her around the village, begging for a story. And she would spend hours telling them. Marvelling at how her thoughts became tangible right before her eyes. Sometimes, she’d forget she was the one telling the story, watching with widened eyes as the story unfolded before her.

Rani grew up before I knew it. Perhaps even before she knew it. I remember her wedding day. She got dressed in the room, looking confused and shocked. She’d never met him before. He lives in the city, big man. Amma told her as she painted her face with foundation and powder. Rani had tears in her eyes when she left the room. She looked suffocated, drowned in her heavy saree, jewellery and make up. Helpless. She looked like a mere puppet. Simply some paint and sequins, held together with cloth.
Her things were packed into a small suitcase and sent to the city. She wondered why they would send her away to live with a stranger without a second thought. She felt betrayed. She strained to look out of the window as the bus pulled away. Watching, as the only life she knew, was being packed into a small suitcase and disappearing into the horizon.

He was very quiet and seemed much older than her. She moved into a small, cold house with his parents and him. Like a dark box that would have the lid on it for days together. Every now and then, the lid would be opened. He would take her out to parties like a trophy, his arm securely around her, beaming with pride when his friends remarked on how lucky he was. It was tiring. She could feel their eyes follow her every move. But she would stay quiet, keeping that ridiculous smile plastered to her face for hours, until it was time to go back home.
At home, they hardly spoke to her. She toiled away in the kitchen, cooking and cleaning through the day. She smiled, spoke, ate and slept when she was told to. Her arms and legs tied securely to invisible strings. They were tugged at recklessly. Her in-laws, her husband, society, even her conscience, each one pulling her in different directions. Day after day, year after year.

Some days, she would open the suitcase and hold me in her palm. Looking at me with resignation as tears filled her eyes. I looked back at her, helplessly. She never touched my strings again, but she would hold me close to her chest, looking into the distance with glassy eyes for hours. She missed the village. I don’t blame her.
I too, remember the village like it was yesterday. There are few things more beautiful than the chatter of happy children, the smell of roasted peanuts, and a clear, starlit sky.