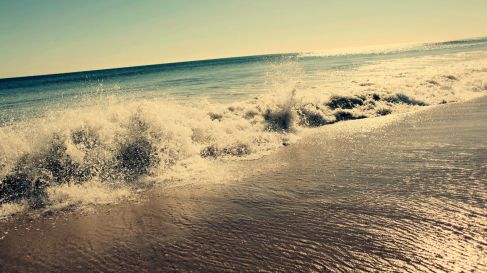 She sells sea shells on the sea shore.
Some days, Amma and Anju would go to the beach with Appa. The sand between their toes, the sun on their skin, the wind in their hair. They’d hold hands, giggling as the warm waves crashed against their feet. They’d decorate sand castles with shells and eat roasted peanuts by the coast. The waves would speak to Anju.  In it, she heard the laughter of little children, the songs of happy fishermen, and the secrets of strange lands beyond the horizon. Like everyone else in her little, quaint coastal village, the sea was her first love.

The sea is full of treasures, Appa would say dramatically. He’d set off on his bright red boat every morning, laden with nets, baits and promise. It was the pride of his life. He called her Padmini. Fit for a king, he would declare. Painting her on the weekends, carefully retouching the parts that had chipped. She’d sparkle in the sun, bright, beautiful, almost majestic. One could see Padmini in the horizon far before any of the others boats.

“Where does Appa go, Amma?” Anju asked her one evening. “He’s all the way there, you see it?” She said, pointing at the sunset in the horizon “Beautiful, isn’t it? Where the amber skies meet the deep, glistening blue sea.”

One day, it rained. Amma spent the night glued to her window, waiting, but the waves didn’t bring him back. For a week, she sat by the shore, looking far into the horizon for a bright red boat that never came. She refused to move. The food the fisher women left her would go untouched. She’d stare at the sea accusingly. The sea that Appa had loved, worshipped and trusted.  The sea that claimed her husband and left behind nothing but pretty shells and foam.

Amma sat by the coast that evening, listening to the waves crashing against the rocks. Until all of a sudden, she snapped out of her trance. She took Anju’s hand firmly in hers and walked towards the sea. Anju tried keeping up, startled and confused. She shuddered as she felt the cold waves against her feet, then her knees, her waist, her neck. Amma didn’t stop walking. Salt water gushed into her mouth. She gasped for breath, but the waves showed no mercy.
“Where are we going, Amma?” Anju choked, trying to break free.
Amma smiled, holding her hand tighter.

“To see Appa”, she said, pointing at the sunset in the horizon, “where the amber skies meet the deep, glistening blue sea.”