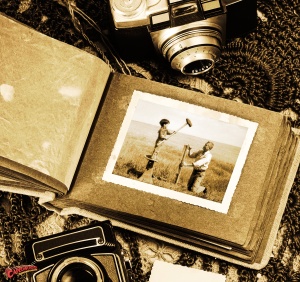 A few weeks back I unearthed some old photographs from my mom’s high school days and before I knew it I found myself spending the day trapped in a tower of stacked photo albums.

Each album felt like a collection of short stories. I recalled how special and exciting photographs were a decade back. How I would use the photos my Kodak reel would grant me so sparingly. How I would eagerly wait to get them developed. How I would hold them almost respectfully, by the edges to make sure I didn’t leave finger prints on them. How my parents would indulge me with pretty photo albums and how I would spend hours captioning my photos and slipping them in.

These photographs had an unexplainable sense of dignity that I believe facebook profiles will never achieve. Social networking has robbed photos of their soul and depth. Photographs no longer tell stories. They lie. They paint a picture of our lives so deceptively that we’re almost convinced that perfect hair and an extensive wardrobe is really whats worth aspiring for. Memories are no longer personal journeys. They’re conditioned, manicured and tweaked to be in line with the experiences we want people to believe we’ve had.

Flipping through a photo album was often a post-dinner family affair. They were once a catalyst for conversations, laughter and tears. The best part about these photos was that they would soon be forgotten about and would hibernate in those albums until someone stumbled upon them months later.
Today, every waking hour of our lives have been documented with such untiring, relentless passion. Every one of these moments is so accessible and so often viewed on Facebook, Instagram and Twitter, we’re denying ourselves the beauty of reminiscing.

It makes me realise that we’re doing photographs all wrong. That my children will never feel the way I did about my mother’s photographs.
I realise how mundane they would think my assortment of #goodhairday selfies are. How they would never know the effort that went into finding that perfect angle to hide my paunch, thunder thighs and manly shoulders all at once. I wonder if itll make a difference to them that I spent 20 minutes this morning trying to pick between Amaro and Walden. I wonder if they’ll notice, that though it’s the same poses, same places, same people, my outfits were always different.

My father took several photographs of my mother in the hospital the day I was born. Flipping through the album, I realised how beautiful pictures of a tired young mother in a baggy hospital gown can be. How there is no such thing as a bad angle or a bad hair day when the moment is that precious.
I realise that the difference between photographs then and now is that it was valued by how it made you feel, not by how you looked. How a memory that matters cannot be made more beautiful by increasing the saturation. That filters simply dilute the beauty of a memory, like a girl who wears too much make up. And how easy it is to forget the essence of a moment when you’re so lost in making it pretty for the world.

I wonder how radically different our pictures would be from our facebook profiles if we each started our own photo albums. If no one would see them and all that mattered was revisiting a significant place in the past.
We’ve grown to underestimate how wondrous it really is that a moment in time can be captured and preserved forever.
Its for that feeling you have when you stumble upon an old photo album that I believe the camera was invented in the first place. How for a few seconds, you can revisit happier, simpler times before snapping back into reality.

How for a few seconds, we had created a time machine.

23 thoughts on “Finding your Inner Selfie”